We encourage you to listen to Fr. Cristino’s reflections in two episodes of Upfront with the Archbishop. The podcast features host Jenny Connelly, as well as Archbishop Richard Smith, of the Catholic Archdiocese of Edmonton Alberta, our General Co-ordinator. 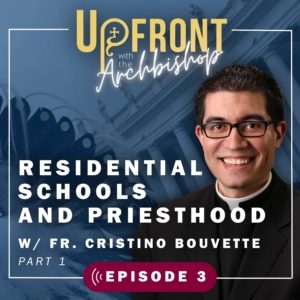 In a special two part series, we sit down with Fr. Cristino Bouvette to talk about the legacy of the Canadian residential schools, the Church’s relationship with Indigenous people, and Fr. Cristino’s own perspective on the past year as an Indigenous Catholic priest.
https://www.buzzsprout.com/1983534/10671303-residential-schools-and-priesthood-w-fr-cristino-bouvette-part-1 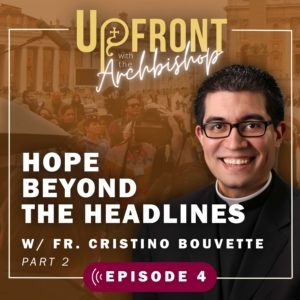 Upfront with the Archbishop is produced by Matthew Bodnarek.
The full podcast series is available on the Archdiocese of Edmonton’s website.

Extra: CBC In Person’s with Father Cristino Bouvette
My kokum blessed what the world said was incompatible: I became an Indigenous priest

The Papal Visit to Canada secretariat has been created by the Canadian Conference of Catholic Bishops, the national assembly of the Bishops of Canada. It was founded in 1943 and officially recognized by the Holy See in 1948. The Papal Visit team is working closely with numerous partners including the Vatican, Indigenous Elders, knowledge keepers and survivors of residential schools along with government officials at the federal, provincial and municipal levels as we prepare for this historic visit.

11 Questions About the Papal Visit

Reflections of an Indigenous Elder and Catholic, Graydon Nicholas
Scroll to top